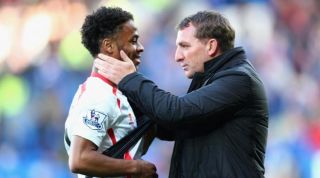 The Liverpool boss has been faced with talk of a club versus country row after Raheem Sterling was benched for England's victory over Estonia, having informed national team manager Roy Hodgson that he was tired.

Sterling has come in for criticism for admitting fatigue, but Rodgers leapt to the teenage attacker's defence by highlighting the fact that he had not refused to play in Tallinn.

Rodgers denied talk of a rift with Hodgson and called for an end to the saga as he turns his attention to improving Liverpool's fortunes following an indifferent start to the season.

The Merseyside club beat West Brom before the international break and they will be eager to build on that by heaping more misery on bottom side Rangers at Loftus Road.

Former Swansea City boss Rodgers knows there is more to come from his new-look side, who sit ninth in the table after winning only three of their first seven top-flight games.

"I'm quite relaxed on it all and we will look at it after 10 games to see how we're set," he said.

"There's no crisis - we lost a world class player [Luis Suarez to Barcelona] and brought a number in.

"The players here are magnificent and the attitude and effort they show gives me the hope we can push on."

Rodgers will assess the fitness of striker Daniel Sturridge, who has not featured for Liverpool since August after suffering a thigh injury on international duty.

Dejan Lovren (abdominal) and Mamadou Sakho (thigh) are concerns for Rodgers in defence, though the Croat is thought to have a better chance of returning from the issue picked up on international duty.

Midfielders Emre Can (ankle) and Joe Allen (knee) are set to return to the squad.

QPR manager Harry Redknapp has dismissed talk of him being under pressure after the London club's poor start to the season.

Tim Sherwood has been linked with the Loftus Road hotseat after Rangers' dismal display in a 2-0 defeat at Redknapp's former club West Ham before the international break.

A defiant Redknapp said he needed no assurances over his future from chairman Tony Fernandes and is backing his side to turn the corner.

"It was never going to be easy this season," he said. "There's been a big upheaval. The lads haven't hit the ground running.

Midfield duo Joey Barton and Jordon Mutch will play no part against Liverpool due to hamstring injuries, but Nico Kranjcar is expected to feature despite suffering a broken toe.

Chile duo Eduardo Vargas and Mauricio Isla will be assessed after returning from international duty, but Redknapp expects both players to be available for selection.