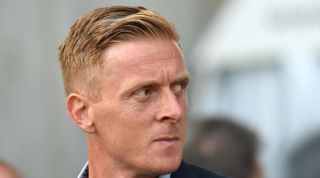 The Welsh club have made an impressive start to the 2014-15 campaign, winning 2-1 at Manchester United before edging Burnley 1-0 on home soil last weekend.

A League Cup triumph over Rotherham United followed in midweek, and a third home fixture in the space of a week presents Swansea with the chance to make it nine points from nine heading into the international break.

But Monk recognises the challenge posed by this weekend's visitors and wants to make south Wales a difficult place to visit for Swansea's top-flight rivals.

"West Brom will be tough, but we are at home and we want to make this place a bit of a fortress," he said.

"It would be nice to go into the international break with nine points.

"We need to improve and keep doing what we're doing well.

"The boys have done well and have been focused in training, we want to put in a good performance."

Swansea won just six league matches at the Liberty Stadium last term, with West Brom claiming a 2-1 victory there in March - Stephane Sessegnon and Youssouf Mulumbu scoring for the visitors after Roland Lamah had put the Welsh side in front.

Alan Irvine's men were pushed all the way by fourth-tier Oxford United in the League Cup on Tuesday, and were relieved to come away with a 7-6 victory on penalties.

Irvine knows his players will need to be on top form to get the better of their hosts on Saturday and pick up a first league win of the season.

"They're a good team, they have a good way of playing," he said. "They pass the ball very well.

"If you're not able to compete with them in terms of the way they move the ball then you're going to have problems.

"They're a very good football side and you've got to be very well organised and very disciplined."

West Brom's latest new arrivals Georgios Samaras and Silvestre Varela will not be involved as they seek a return to full fitness, while Joleon Lescott (knee) remains unavailable and Sebastien Pocognoli (thigh) is a doubt.

Cristian Gamboa could make his Premier League bow after a debut outing against Oxford.

Swansea, meanwhile, will be without Leon Britton and Marvin Emnes (both knee), who have not featured yet this season, while Ki Sung-yueng should make his first appearance since signing a new four-year contract.

Federico Fernandez and Tom Carroll could also be in line for league debuts.