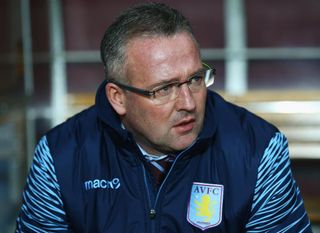 Villa manager Lambert takes his resurgent side to The Hawthorns seeking a third straight victory.

If the previous meeting between the two teams is anything to go by, the stage is set for an entertaining affair.

Villa came out 4-3 winners at Villa Park on that occasion in January, with Christian Benteke's 64th-minute penalty settling matters.

The last two encounters at The Hawthorns have also produced thrilling 2-2 draws and Lambert anticipates more drama this weekend.

"Anywhere you go, derby matches are massive for supporters," he said.

"They always want to get one over on their work-mate or whoever it is. That's normal.

"The derbies between Villa and West Brom that I've been involved in have always been really good games with lots of goals in them and I don't think this one will be any different."

Midfielder Fabian Delph and centre-back Ron Vlaar could hand the visitors a further boost, with the duo set for late tests to see if they are ready for first-team comebacks from long-standing shoulder and calf injuries respectively.

In contrast to Villa's recent fortunes, West Brom head into the match seeking a derby boost after failing to win in their past five games.

A dour 0-0 draw at Hull City last Saturday did at least end a run of four straight defeats, but their poor run has left them just a point above the relegation zone and has seen the pressure mount on head coach Alan Irvine.

Goalkeeper Ben Foster remains confident in the team's ability to climb the table, though, and is fully aware that the fans will demand a performance against their rivals.

"I know what's at stake in these matches," he told West Brom's official website.

"I've seen Baggies fans around the midlands this week and they've all being telling me what we need to do - this is the one they talk about.

"There will be a lot of emotion on Saturday."

West Brom remain without captain Chris Brunt (hamstring) and Jonas Olsson (Achilles), but Youssouf Mulumbu and Stephane Sessegnon have been passed fit despite picking up knocks against Hull.