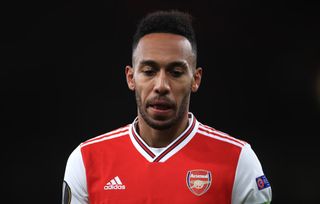 There may be four more days until the deadline but FPL managers are already making moves – but unfortunately some bosses look to have jumped the gun without consulting the fixture list.

Arsenal are the fourth most popular club so far this week, based on the number of players transferred in, but the Gunners are one of four clubs who don’t have a match this weekend.

The EFL Cup final between Aston Villa and Manchester City means that these two and their original gameweek 28 opponents – Arsenal and Sheffield United – have a blank gameweek.

Pierre-Emerick Aubameyang accounts for more than half of Arsenal’s inbound transfers and is one of only three players who has already been brought in by more than 100,000 managers.

Harry Kane is out for at least another month with injury and Sergio Aguero has filed three blanks in a row.

As a result, it is not hard to see why many would see Aubameyang as the best striking option priced over £10m beyond the weekend, but it is harder to see why that move can’t wait until next week.

With the three most expensive forwards ruled out of the forthcoming round of fixtures, Jamie Vardy and Roberto Firmino find themselves as the top-priced viable options but neither has found the back of the net in their last four matches.

The transfer market shows that managers have more faith in Vardy to recover his form, with more than five times as many transfers in as Firmino.

You don’t have to spend big on your front line though – Dominic Calvert-Lewin has found the net three times in the same period and would leave you with an extra £3.5m in the bank to spend elsewhere.

Late to the party

After his impressive early season form, John Lundstram has found himself restricted to substitute appearances in Sheffield United’s last four matches – more than enough for a lot of managers to show him the door.

Over 100,000 bosses have done just that, but there are another 8,000 who have now decided that it is finally time to turn to the former Oxford man.

In fact players from the red and white half of Sheffield have been welcomed by more new owners than those from nine other Premier League clubs, including Tottenham.

It is possible that cheap players are being used as a makeweight in double transfers, to upgrade the likes of Jack Grealish, who is the second-most transferred out player this week, but it still seems odd that so many inactive players are being brought in.

Fail to plan, plan to fail

While some managers can’t seem to plan as far ahead as this weekend, it may even be worth looking forward to gameweek 31 when the sixth round of the FA Cup will wreak havoc with the fixtures.

With the fifth round yet to take place, there are many permutations, but the only clubs guaranteed to play that week are Wolves, Bournemouth, Burnley and Watford.

This is because every other fixture contains at least one club still in the FA Cup and, in the case of Manchester United versus Sheffield United, it would take both clubs losing to lower league opposition to see the match go ahead.

The stability offered by Bournemouth and Watford is not proving tempting, though, with those clubs finding themselves as the only two less popular than the fixtureless Aston Villa – a damning indictment if ever there was one.