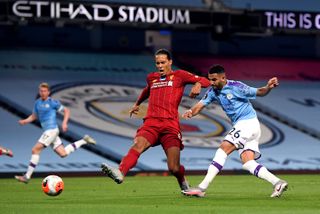 But with mini-leagues on the line and pride at stake, who should you look to for advice?

We’ve analysed the squads of more than 250 bosses who have finished in the top 10,000 in at least five previous seasons to see who they’ve transferred in and out most ahead of the gameweek 34+ deadline.

Mahrez made in heaven?

Phil Foden is the man of the moment at Manchester City after shining during his first extended run in the team. However, the game’s top managers have already shifted their attention to another member of Pep Guardiola’s midfield.

There has been a huge swing towards Riyad Mahrez, who is now owned by more than a third of the elite managers in our sample despite registering just a single point in each of City’s last two matches.

The Algerian’s underlying numbers show promise despite his recent points paucity, with only the pricier Kevin De Bruyne and Raheem Sterling ranking higher in the game’s ICT Index for the club this season.

An easy-looking run-in and the need for squad rotation make Mahrez an attractive differential for managers chasing a mini-league title.

While few of the other players growing in popularity will be a surprise, one of the top 10 may raise eyebrows.

Brighton forward Aaron Connolly burst onto the scene with a brace against Spurs back in October, but soon found himself back on the bench and hasn’t scored since.

However, three consecutive league starts for a player costing just £4.2m – not to mention three winnable fixtures to come – makes the young Irishman an attractive budget option, particularly for anyone who has yet to play their Bench Boost chip.

Son is going down

Despite registering assists in two of Tottenham’s last three league games and facing struggling Bournemouth next, the majority of top bosses who owned Son Heung-min have decided that now is the time to sell.

For some, he may have been a necessary sacrifice to allow a player with more perceived point-scoring potential like Mahrez or Anthony Martial to be brought in. But it is possible others have been swayed by his team’s recent sub-par performances and apparent lack of harmony.

Another expensive North London asset falling out of favour is Pierre-Emerick Aubameyang, although this is understandable given Arsenal faced the first of three tough fixtures in a row on Tuesday night.

Ismaila Sarr’s ownership among elite managers meanwhile had been holding steady at above 15% since gameweek 29, but Watford’s poor form since the restart has finally seen his owners lose patience.

His £6.1m price tag looked poor value after five successive blanks, particularly when there are so many cheaper players in form.