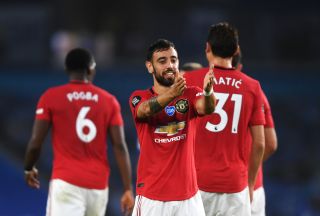 Anthony Martial’s hat-trick last week made him the most popular signing ahead of the transfer deadline, with many managers selling his Manchester United team-mate Bruno Fernandes to make room.

However on Tuesday night it was Bruno who ran the show with two goals against Brighton, while Martial blanked despite starting up front.

To help decide which Red Devils player is the best long-term bet, and settle a few similar debates elsewhere, we’ve delved into the game’s Threat and Creativity metrics, which are designed to track how many goals and assists a player should be registering based on their underlying performances.

Since the season resumed, Martial has led the way comfortably when it comes to Threat, suggesting that his recent exploits in front of goal were no fluke.

However Bruno has offered the second most Threat during June and has also registered over twice as much Creativity, suggesting that he could be involved in more goals over the rest of United’s campaign.

It’s worth stating that neither man has been the Red Devils’ most creative player since the lockdown ended – both Paul Pogba and Marcus Rashford have looked more likely to assist a goal than score one during June, with Pogba’s status as the team’s most creative player all the more impressive given his limited playing minutes.

For managers seeking a differential, his 3.9% ownership and cheaper price tag make him an intriguing option.

Wolves’ pack has a clear leader

The debate raged earlier in the season about which of Raul Jimenez and Diogo Jota was the better fantasy option in the Wolves attack, but the Mexican appears to have won the argument.

Jimenez only missed seven minutes of Premier League football in June and his Threat score is over twice that of his next most attack-minded team-mate.

While Adama Traore remains a popular choice in midfield, his limited involvement so far has left managers scouring for alternatives.

For those keen to stick with a Wolves side boasting both strong form and easy fixtures, Joao Moutinho could be the answer – an ever-present since the season resumed and cheaper than the Spaniard, his Creativity score is the highest in the team by a convincing margin.

Eddie Nketiah has been an unexpected hero for Arsenal since his return from an unsuccessful loan spell at Leeds.

The young striker has started ahead of the Gunners’ former record signing Alexandre Lacazette in two of their three post-lockdown league games and looks set for an extended run in the team.

While Pierre-Emerick Aubameyang has generated more than twice as much Threat, his £11m price tag is two and a half times that of Nketiah’s, so value-conscious managers shouldn’t shy away from the cheaper option.

Bukayo Saka is another potential bargain for bosses considering Arsenal assets, having started all of their last three league games, generating more Creativity than any of his team-mates in the process.