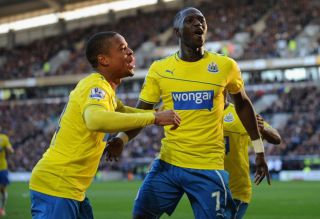 The three France internationals have all shaken off injuries and will be looked upon to provide a much-needed lift on Monday as Pardew's men seek to end a run of five straight defeats.

Sissoko, meanwhile, has overcome a hamstring complaint that kept him out for a month.

Ahead of the trip to Arsenal, Pardew said: "They will be up to speed and will be very important to this game."

Newcastle's boss will return to the touchline at the Emirates Stadium, having served a lengthy suspension for his altercation with Hull City's David Meyler last month.

Pardew has seen his side pick up just three points from seven games since he was banned, but remains hopeful of witnessing improvement in the closing weeks of the season.

"We need a result. Our recent run has not been good enough for our fans, me or my staff," Pardew added.

"The players are desperate to get a win. We need to show that we are a good team and that we're together.

"We need to put right the recent run with a committed performance."

Asked about the end of his suspension, Pardew said: "It'll be very pleasing to get back there (the touchline). I'll sit down a bit more but will still be at the side of the pitch."