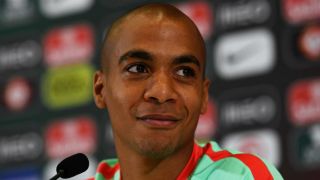 Joao Mario hopes Portugal can banish the memory of 2004 by taking on the role of an underdog that crushes the dreams of an expectant home nation when they face France in the final of Euro 2016.

Portugal were hosts and widely tipped to claim the European Championship 12 years ago, despite having already lost to final foes Greece in the opening match of the tournament.

The unfancied Greeks made sure lightning struck twice as Angelos Charisteas scored the only goal after 57 minutes in Lisbon.

Similarly, little is expected of Portugal this time around, while France are riding a wave of euphoria following Thursday's rousing 2-0 semi-final victory over world champions Germany in Marseille.

Fernando Santos' men overcame Wales by the same scoreline in Lyon a day earlier - their first win inside 90 minutes in the competition.

"It's a final, France is not going to underestimate us," said Sporting CP midfielder Joao Mario, who was an 11-year-old when his country made their last final appearance.

"The 2004 final was unfortunate. We are not favourites but we think we can win. France is strong but we want this cup."

Much attention will be focused on Cristiano Ronaldo in the build-up to the match, as the Real Madrid superstar aims to add a major international honour to his stellar career and become the European Championship's all-time record goalscorer.

Ronaldo drew level with French icon Michel Platini on nine goals with his emphatic header against Wales, although Germany boss Joachim Low does not expect his presence to derail France.

Joao Mario draws strength from the post-match words of Wales manager Chris Coleman, who hopes Portugal can go all the way

"Everyone is entitled to their opinion," the 23-year-old said in response to Low's take on the final.

"The Wales coach says he wants us to win. This will motivate us. We want to win, think positive we will keep on thinking we can win.

"There are many new players in this group. Everyone has overcome obstacles to get here."

A fresh face expected to feature once more in the France line-up is 22-year-old Samuel Umtiti.

The Barcelona-bound centre-back made an assured international debut during the 5-2 quarter-final win over Iceland, pipping Eliaquim Mangala to a starting berth on the back of Adil Rami's suspension.

Umtiti retained his place, despite Rami's availability, against Germany and again looked every inch the kind of player who is ready to shine on the big stage.

"He surprises me," said France midfielder Blaise Matuidi. "He's a young player and to start like this in his first games in the national team, in a competition like the Euro, it's exceptional to perform like this.

"He deserves credit. He has a great maturity, he is very calm on the field, he listens, he has a lot of talent. It's not for nothing that Barcelona recruited him."

Both teams expect to have 23-man squads to choose from, although Pepe again trained separately from his Portugal team-mates on Friday as his continues to rehabilitate from the thigh injury that sidelined him against Wales.

If fit, the Real Madrid centre-back will be charged with keeping Atletico star and tournament top scorer Antoine Griezmann quiet.

Griezmann is set to become the third Frenchman to head the scoring charts at a major competition following Just Fontaine at the 1958 World Cup and Platini at Euro 1984 - the latter being the first of two events alongside the 1998 World Cup that Les Blues have won as hosts.

William Carvalho is back from suspension and likely to replace Danilo at the base of the Portugal midfield.

Key Opta stats
- This will be the fourth meeting between Portugal and France in a major tournament. France have won the previous three, all in semi-finals - Euro 1984, Euro 2000 and the 2006 World Cup.
- France have won their last 10 games against Portugal, their best current run against any team after 13 consecutive wins over Luxembourg. Portugal have only scored once in the past four meetings - a Ricardo Quaresma penalty in October 2014.
- Portugal have played the most games in the history of the European Championships without winning it (34). Cristiano Ronaldo, who is now level with Michel Platini's all-time tournament record of nine goals, has played more matches at the competition than any other player (20).
- Portugal are unbeaten in their 13 competitive fixtures under Fernando Santos (W9, D4). Victory over Wales in the quarter-finals was the first of those wins to be decided by more than one goal.
- Portugal have conceded only one goal in their last five knockout games at the European Championships, against Poland in this year’s quarter-finals.
- France are unbeaten in their last 18 major tournament games played on home soil, winning 16 and drawing two. Their last defeat dates back to July 1960 in the inaugural European Championships against Czechoslovakia.
- France have the chance to draw level with Germany and Spain as three-time European Championship-winners. No nation has won more.
- Didier Deschamps could become the second person to win the European Championships as a player and as a manager after Germany's Berti Vogts.