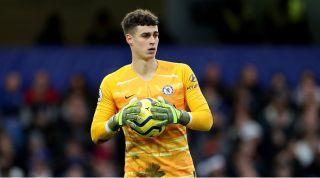 Kepa Arrizabalaga is one of eight Chelsea players who could be sold this summer, according to reports.

The Sun write that Frank Lampard is considering a major overhaul at Stamford Bridge as he attempts to build a team capable of winning the Premier League title.

Chelsea are currently fourth in England's top flight but face a battle to qualify for the Champions League, with Manchester United just three points behind them.

The Blues did not make any new signings in January despite having their transfer ban reduced after a successful appeal to the Court of Arbitration for Sport.

That ban meant Lampard was unable to add to his squad last summer, although Chelsea did welcome Christian Pulisic to the ranks having agreed a deal midway through the 2018/19 campaign.

And the former England international is determined to make up for lost time by conducting major surgery to his squad this summer.

Lampard dropped Kepa, who became the most expensive goalkeeper of all time when Chelsea paid £71.5m to sign him in 2018, earlier this month.

The 25-year-old has failed to convince his manager that he is the long-term answer between the sticks, and could therefore be let go at the end of the season.

Chelsea may also look to move on Jorginho, who cost the club £50m when he joined as Maurizio Sarri's first acquisition.

Fellow midfielder Ross Barkley is also under threat, with the former Everton man having failed to nail down a regular starting role this term.

Lampard is also thinking about axing Willian, Pedro and Kurt Zouma, while Marcos Alonso and Emerson Palmieri are both expected to depart.

Chelsea have already agreed a deal to sign Ajax forward Hakim Ziyech ahead of the 2020/21 campaign, and Lampard is already pushing for more additions.

The west Londoners return to Premier League action against Bournemouth on Saturday.