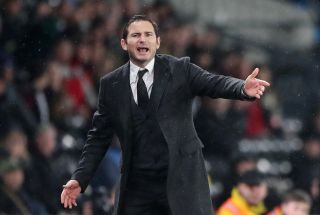 Derby manager Frank Lampard believes his team made a “statement” after they thrashed Rotherham 6-1.

Lampard watched Derby hit six at Pride Park for the first time to move back into the play-offs and leave Rotherham in the bottom three.

Mason Mount marked his comeback after two months out by winning the 13th-minute penalty Martyn Waghorn dispatched before Bradley Johnson headed in a Scott Malone cross in the 39th minute.

Richard Wood headed in a corner but Mount’s header set-up Duane Holmes before Waghorn completed a hat-trick with his second penalty after Tom Lawrence was tripped by Marek Rodak to give Derby six goals in a game for the first time since 1996.

Lampard said: “My message at half time was not to come off it because I wanted them to make a bit of a statement, and I’m not talking about statements to everyone else but to ourselves and what we can do.

“So to score that many goals and keep creating and playing such free-flowing football is brilliant and we need to take that forward.

“The performance was top level and I’m delighted with the goals because we’ve been playing pretty well at times but not scoring enough which has been a problem recently.

“When we play like that we are going to give everyone in this league a tough game. When you are on top, you have to take your moments and we did that and killed the game very early.”

Lampard was impressed with Mount’s display and said: “He’s worked incredibly hard to get fit and he came straight back in as he left.

“So we’ve got a hungry Mason now desperate to play like he did today so if he can be like that for the last eight games because he injects so much into the team.”

Rotherham manager Paul Warne said: “I thought going forward we looked quite dangerous and I thought every time we got in their penalty box we looked like we were going to score.

“I think we played Derby on a good day and we are missing four key players. We’ve got a small squad although I still expected a bit more out of the team  but maybe I picked the wrong team or did the wrong things so I have to look at myself.

“The second goal in my eyes was very dubious, I thought it was offside and then it allows their players to have confidence on the ball and their movement was really good.

“No one likes to lose heavily but at the start of the season Brentford gave us a good licking and we bounced back so it might reset everybody.

“I believe it will have some psychological harm for a couple of days but on Monday we’ll be there to pick them up again so I hope they hurt over the weekend because it’s certainly ruined mine but I don’t think it will have long-term damage.”