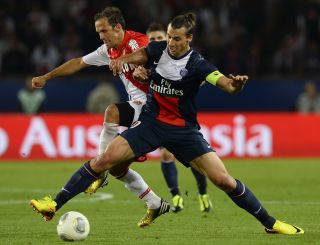 The proposed new measures would see companies - including football clubs - forced to pay a 75 per cent rate of tax for the part of employees' annual salaries that exceed €1million.

However, all of the country's professional clubs are to set to boycott games from November 29 to December 2, as they aim to secure an exemption from the tax.

"There will be a weekend without a game at the end of the month (of November)." UCPF (Union of Professional Football Clubs) president Jean-Pierre Louvel said.

Big-spending Ligue 1 champions Paris Saint-Germain - who have the likes of Zlatan Ibrahimovic and Edinson Cavani on their books - would be heavily impacted by the tax, although their Qatari owners would likely be able to foot the bill.

Still, clubs are concerned that the implementation of such a tax, proposals for which are expected to be passed by the end of the year, would cripple smaller clubs with a smaller amount of high earners under contract.

And Louvel, speaking after the UCPF's general assembly on Thursday, insists that the strike action is in the best interests of the French game.

"Today you are witnessing a historical movement that unites the entire family on French football," he added.

"It is about saving French football.

"The decision was taken unanimously by all club presidents."