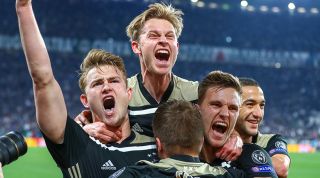 De Jong helped Ajax to the semi-finals on Tuesday night as the Eredivisie came from behind to record a stunning win over Juventus in Italy.

The 21-year-old will leave Amsterdam this summer, however, after Barcelona agreed a €75m deal to bring him to the Camp Nou at the end of the season.

De Jong, however, speaking to FourFourTwo ahead of that tie in our May 2019 issue – out in shops now – admitted that he would do his best to knock out Barça in the Champions League if they meet in the final.

“I have thought about that scenario,” he told FFT.

“That would be special, but at the same time it doesn't matter to me who we play. As long as I'm an Ajax player, I want Ajax to win.

“I'd have no qualms about trying to knock out Barcelona like we did Real Madrid.”

De Jong has long been fond of Barcelona: when he was younger, he and his family used to holiday around 50 miles away on a campsite near L’Escala.

He recalled those summers fondly during his chat with FFT – and in particular, one memorable matchday experience watching a Barça great.

“Those holidays were great,” said the Dutchman. “There were three football pitches on the campsite, and there were always tournaments organized for us to play in during the evenings.

“I remember going on a stadium tour, which was really incredible. Being at ground level and looking up to see this huge stadium looming over you – wow.

“One summer, we even went to watch a Barça friendly. I remember Ronaldinho playing and it being incredibly exciting to actually be there watching him play live.”

Read the full interview with Frenkie de Jong in the May 2019 issue of FourFourTwo magazine, in which we hail Ole Gunnar Solskjaer and Marcelo Bielsa’s transformative impacts at Manchester United and Leeds United. Plus, we reveal the top 51 players in the Football League, go one-on-one with Joe Cole, remember when Bobby Moore played against England, visit Turkey to watch Istanbul Basaksehir take on Fenerbahce, and reminisce with Kevin Keegan about his time in charge of Newcastle.