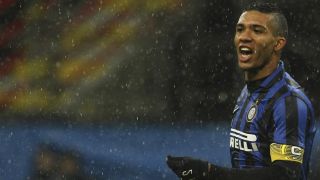 Roberto Mancini will be keen to avoid a repeat of the indiscipline that cost his team last weekend when Inter travel to the Stadio Comunale Matusa on Saturday to take on Frosinone.

The relegation-threatened hosts are only one point away from safety with seven games remaining, and anything they can take from Mancini's out-of-sorts side will be considered a huge bonus in their hunt for survival.

Inter continue to suffer from indifferent form as they face the prospect of failing to qualify for the Champions League again, despite having led the Serie A table until just before the winter break.

Mancini's side now lie 18 points behind leaders Juventus and are eight points off third-placed Roma, who occupy the third and final Champions League qualifying position.

Their cause has not been helped by indiscipline, with Mancini left frustrated by Joao Miranda and Yuto Nagatomo being sent off, the former for committing two bookable offences and the latter receiving a straight red card, in a 2-1 loss at home to Torino last weekend.

"The season isn't over but we have to learn from our mistakes," he said.

"We need time to build maturity.

"At the start of the season we were very focused and picked up some great results. Then we went through a tough patch where we got less than we deserved."

Despite his players contributing to their own downfall, Mancini still placed plenty of blame for the defeat at the referee's feet, suggesting Miranda's first yellow card was incorrectly given and accusing Torino of diving to earn the decisive penalty.

But defender Juan is keen for Inter to move on.

"We're all a bit disappointed after losing the game on Sunday but we have to end the season on a high," the Brazilian defender told Mediaset Premium.

"We mustn't drop any more points. We're certainly motivated. We're a big club and we must set out to win every game.

"Our aim is quite simply to take each game as it comes and see where we end up. We need to be more aggressive and more focused.

"We've got a tough match coming up against Frosinone on Saturday. We'll have to be at our best to come away with three points."

Frosinone, who were thumped 4-0 at Genoa last time out, are without centre-forward Federico Dionisi, who is suspended due to yellow card accumulation.

Both Nagatomo and Miranda will be banned for Inter.

- Inter Milan's 4-0 win in the reverse fixture was Frosinone's largest Serie A defeat in terms of goal difference, along with their 5-1 loss vs Napoli and 4-0 vs Genoa.
-Frosinone have kept a clean sheet in five of their last six home league games, while they have not conceded at all in their last 270 minutes of action.
-Inter's last win away from home in Serie A came on January 6. The Nerazzurri have picked up just three points from their last six games on the road.
-Frosinone have conceded 37 goals in the second half of their games, more than any other Serie A side this season. Meanwhile, Inter have shipped 10 of their last 11 goals after half-time.
-Inter Milan have used only four Italian players in this campaign, which is fewer than any other side.
-The reverse fixture between Frosinone and Inter produced Jeison Murillo's first Serie A goal and Jonathan Biabiany's most recent goal in the Italian top-flight.