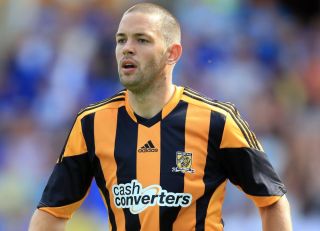 The 28-year-old has found first-team opportunities hard to come by at the KC Stadium this season, and spent time on loan at Sheffield Wednesday earlier in the campaign.

However, he has spent more time on the pitch since returning to his parent club, helping Hull to the final of the FA Cup with January signings Shane Long and Nikica Jelavic both cup-tied.

Fryatt's current contract expires at the end of the season but manager Bruce has no intention of letting the forward leave, despite interest from other clubs.

"Matty will generate interest because he's out of contract, but I've said to him that we will sit down and offer him a contract," Bruce told the Hull Daily Mail.

"We need to secure our Premier League status first but even if we didn't, god forbid, there would still be a contract offer there for Matty Fryatt.

"Matty has always wanted a chance to prove himself in the Premier League so, no disrespect to other clubs that might be interested, he might well fancy his chances of getting a run in the team if he stays here.

"I've promised him that some time he will get a run in the team. Jelavic and Long are not a shoo-in every week. That would be wrong for me to say that."

Hull are six points above the Premier League relegation zone and appear highly likely to retain their top-flight status.