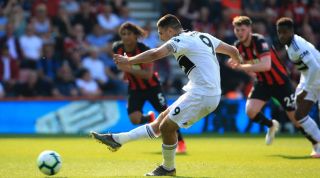 The Serbia international has scored 11 Premier League goals this term but it wasn’t enough to save the Cottagers from relegation.

Saints have flirted with the drop zone this season and are planning a raid for the striker as part of a summer squad overhaul, says the Express.

Fulham are keen to offer Mitrovic a new deal to convince him to stay in the Championship, but West Ham, Crystal Palace and clubs in China have alsio shown interest.

However, the £30 million asking price set by the Craven Cottage outfit could prove to be an obstacle for some of the interested parties.

The report also says that Danny Ings will make his stay at St Marys permanent after spending the season on loan from Liverpool, with Saints set to fork out £18 million for the striker.