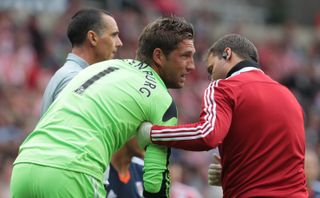 The Dutchman arrived at Craven Cottage from Roma during the close-season but he lasted just 76 minutes of his first Premier League outing at the Stadium of Light on Saturday.

A shoulder problem, sustained in a seemingly innocuous tangle with Jozy Altidore, meant that he could not continue, with David Stockdale taking over in goal.

Despite that blow, Fulham held on to snatch a valuable opening-day 1-0 win courtesy of Pajtim Kasami's headed goal - their only on-target effort of the entire match, which the hosts dominated for large spells, but were routinely frustrated by the Dutchman.

Stekelenburg saved spectacularly from Sunderland debutant Ondrej Celustka's dipping volley to keep the scores level in the first half before midfielder Kasami struck after the break.

Manager Martin Jol admitted afterwards that he is unsure exactly how long the Netherlands international could now be ruled out.

"Hopefully he will be okay," Jol said. "But we'll have to wait and see."