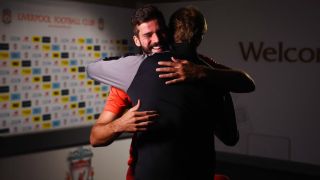 Liverpool manager Jurgen Klopp has described new arrival Alisson as an essential addition after signing him from Roma for a world-record fee rising to £65million.

The Brazilian has inked a "long-term" deal at Anfield in a move that makes him the most expensive goalkeeper in history.

Liverpool's initial investment of £56million marks a significant show of faith in the 25-year-old, who started all five of his country's matches at the World Cup in Russia.

Klopp claimed he encountered little resistance from the Liverpool hierarchy in splurging on a highly rated replacement for the much-maligned Loris Karius.

"[The owners] were quite excited, so we did it," the Reds boss told his club's official website.

"I think it's something we have to do.

"It shows the value of goalkeepers, of course, in this moment. It will happen a lot in the next few weeks I guess and that's it, so we are really happy to have him here now."

The capture of Alisson continues a big-spending off-season from the beaten Champions League finalists.

Naby Keita, Fabinho and Xherdan Shaqiri are the other players to have already joined in what appears a concerted move to transform the perennial Premier League underperformers into genuine title contenders.

Klopp, however, warned it may take time for Alisson to adjust to his new surroundings, despite being "the full package".

"But that's not important now because again, we got him here because of his existing strengths, which is in all goalkeeper departments the highest level.

"But of course he still has to adapt and age-wise he can improve, the best years are coming in the goalkeeper life, so it's all good."