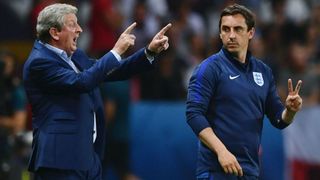 Former England assistant manager Gary Neville is demanding an apology over a newspaper article that claims "friction" between him and Roy Hodgson "undermined" the country's Euro 2016 campaign.

England crashed out of the tournament at the hands of Iceland at the last-16 stage on Monday, prompting Hodgson, along with assistants Neville and Ray Lewington, to quit their positions.

The report in the Observer claims there was a "deterioration in the working relationship" between Hodgson and Neville, while coaching staff are said to have become involved in "a number of disagreements".

A source is quoted as telling the paper: "The players got on fine. It was the coaches who fell out."

The article was tweeted via the Guardian Sport Twitter account on Saturday - the Guardian being a sister paper of the Observer - but Neville responded angrily when he discovered the story.

Targeting the newspaper and the journalist behind the piece, he tweeted: "This is absolute b******t! Apology? Removal of article? Let me know!"

Neville, who endured an unsuccessful spell in charge of Valencia last season, is yet to receive a reply on Twitter, but it is unclear whether the newspaper has made contact by other means.