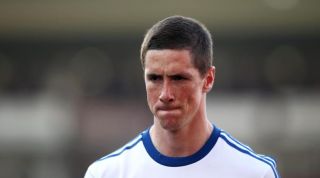 Diego Simeone's men host the London club in the first leg of the last-four tie in what will be an emotional return to the Vicente Calderon for Atletico hero Torres.

Torres joined Atletico at the age of 11 back in 1995 and spent 12 years at his boyhood club before moving to Liverpool and then on to Chelsea in January 2011.

The 30-year-old did not feature in either of Liverpool's visits to the Calderon during his time on Merseyside, meaning that, if selected, Tuesday will mark the first time he has played there as an opposing player.

And former team-mate Gabi knows that Torres could be a threat to Atleti's hopes of reaching the final.

"Fernando Torres is a hugely influential big-game player," Gabi told Marca. "It's up to his coach whether he starts or not, but I'd prefer it if he didn't because he's a cracking player.

"This is going to be an emotional game for Fernando, because he hasn't yet had the chance to return to his boyhood club.

"Every Atletico fan is grateful for everything he did for this club. This game is a vital one for us so we'll leave the pleasantries until after the final whistle."