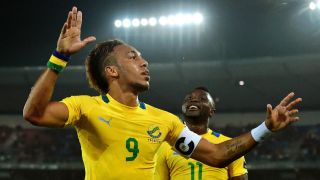 All eyes will be on Pierre-Emerick Aubameyang as the Africa Cup of Nations gets underway on Saturday with hosts Gabon facing debutants Guinea-Bissau.

The Panthers are hosting their second edition of the tournament after co-hosting with Equatorial Guinea in 2012, and will hope to do better than their quarter-final appearance five years ago.

Aubameyang's form will be key to their success but the Borussia Dortmund striker is confident the whole squad, rather than just himself, have the quality to go all the way.

"I think we have a good team, young players but talented players, we know it will be hard but we are at home and I think it is an opportunity to take the trophy this year."

Guinea-Bissau were the surprise package of qualification as they topped a group that included 2012 champions Zambia.

It was a remarkable achievement for Baciro Cande's men given they had only played 32 competitive internationals before the start of the campaign, winning just four.

They nearly doubled that tally in Group E with a double over Kenya and a 3-2 victory against Zambia in Bissau, and the Djurtus will hope to keep on surprising people at the finals, starting with the hosts.

If the Panthers are to achieve Aubameyang's dreams of a first AFCON triumph then the captain will need to replicate the form he has shown for Dortmund this season.

The 27-year-old has netted 20 goals in 22 appearances in all competitions in 2016-17, while his record at international level shows 16 in 29, including three the last time Gabon hosted the competition.

Aubameyang's opposite number will have his work cut out in midfielder trying to keep the Djurtus in contention, the skipper crucial in a holding role in front of the defence.

The 30-year-old is confident that his side can compete at the highest level despite being massive underdogs, he said: "Why should we feel inferior to our group opponents? If Zambia were in Gabon, they probably would be rated among the title favourites. We are determined to enjoy ourselves and the squad believes there is everything to gain and nothing to lose. Let our opponents do all the worrying."

- This is Gabon’s seventh participation in the Africa Cup of Nations; they have never gone further than the quarter-finals (1996, 2012).
- Only two of the last eight teams to make their African Cup of Nations debut have progressed to the knockout stages (Equatorial Guinea in 2012, Cape Verde in 2013).
- Gabon have won their opening AFCON game in each of their last three participations (2010, 2012, 2015).
- Pierre-Emerick Aubameyang has been directly involved in seven of Gabon’s last 10 goals in the African Cup of Nations, scoring four and assisting three.
- Meanwhile, Guinea-Bissau boss Baciro Cande is making his first appearance as manager in the tournament.