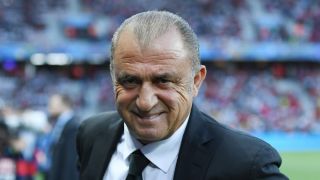 Galatasaray qualified for the Europa League despite a thrilling 3-2 home defeat to Porto, who end their Group C campaign with five wins out of six thanks to Sofiane Feghouli's penalty miss.

Felipe headed Porto ahead and Moussa Marega's fifth Champions League goal of the season extended their lead, although Feghouli reduced the deficit before half-time with a successful first spot-kick.

Porto doubled their lead again with a close-range finish from Sergio Oliveira before Eren Derdiyok sparked hope of a fightback for the hosts, which Feghouli extinguished when he hit the bar from 12 yards.

Despite slipping to a fourth defeat in six Group C games, Galatasaray will go into the Europa League with Lokomotiv Moscow's late loss at Schalke leaving the Russian side bottom.

8 - There have been eight penalties taken in FC Porto's Champions League games this season (four won, four conceded); double the amount of any other side in the competition. Spotted.December 11, 2018

Gala started on top with Derdiyok missing from close range when found in the box by Feghouli, the striker then guilty of another costly error at the other end in the 17th minute.

Alex Telles delivered a superb free-kick into the heart of the Galatasaray box, with Felipe losing marker Derdiyok to power a header past goalkeeper Fernando Muslera.

Porto doubled their lead from the penalty spot, Marega beating Muslera after Mariano tripped Hernani, but referee Aleksey Kulbakov gave a spot-kick to Galatasaray moments later when Felipe fouled Garry Rodrigues, and Feghouli stepped up to slot home and give Gala hope.

Following bad misses from Feghouli and Henry Onyekuru, Porto made it 3-1 in the 57th minute as Marega and Hernani combined to tee up Oliveira.

Derdiyok finally got on the scoresheet when he finished off a low cross from Rodrigues and Fatih Terim's men should have immediately equalised when Kulbakov pointed to the spot for a third time in the game.

Rodrigues drew a foul from Maxi Pereira but this time Feghouli could not convert, hitting the crossbar, but Schalke beat Lokomotiv with a late winner to keep Gala in Europe.

An open Group C has been completely dominated by Porto, who finished five points clear of Schalke. Sergio Conceicao has produced an extremely dangerous side with Marega a potent threat in attack. They are capable of causing problems in the last 16, although defensive weaknesses were also on show.

Scoring in five consecutive Champions League games is no mean feat and Marega has been one of the undoubted stars of the group stage. Only Lionel Messi and Robert Lewandowski have been more prolific in the competition this season.

Derdiyok and Feghouli wasteful for Gala

In sharp contrast to the lively Marega, Gala striker Derdiyok had a day to forget despite eventually finding the net. He should have scored at least twice before he did so, with Feghouli also wasting enough chances to bag the match ball.