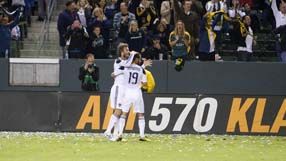 A long range strike from Brazilian midfielder Juninho in the 58th minute was all that seperated the two teams on a rainy night at Qwest Field.

The Sounders, who released Swiss striker Blaise Nkufo just hours before kickoff, created plenty of chances after falling behind but lacked a killer touch in front of goal.

Galaxy's former England midfielder David Beckham played the full 90 minutes on the wet artificial surface in front of a 36,000 crowd.