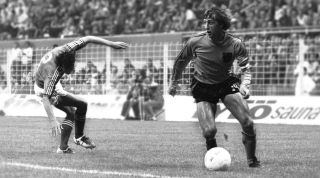 It seems somewhat harsh to relegate any human being down to one moment: one particular time on one particular stage. Ultimately though, it’s easier to remember someone with one shining image.

The Cruyff Turn is 46 years old today. You’ve seen it a million times. Cruyff shapes up to pass the ball from just outside the box with his right foot. He instead tucks the ball behind his standing leg and switches direction by 180 degrees. He carries on with his dribble and gets the ball into the box.

The decibel level erupts. This is the first time that the Westfalenstadion crowd, or anyone watching from the comfort of their front room, had ever seen such a thing. The style, the audacity, the simplicity was breathtaking. Perhaps though, the strangest thing about the Cruyff turn is that maybe - just maybe - it was nothing special. It’s almost sacrilege to suggest out loud. So why is that moment so iconic?

Forty-five years ago today, at the 1974 World Cup, he pulled the Cruyff Turn out of his hat... I actually suffered it many times while playing football with him in the garden! 🤭🤫😬😜 @JohanCruyff ❤ pic.twitter.com/5tnSxFsIpIJune 19, 2019

The turn didn't actually decide a game: it wasn't even in a big game against top-class opposition. Johan Cruyff temporarily leaving his marker in a crumpled heap was the only noteworthy event in a 0-0 group game: it’s not as if it led to a goal. For years, you may have assumed that the defender was an Italian by the royal blue of his shirt. It wasn’t. It was Swede Jan Olsson, in his country’s change strip.

Of course, this doesn’t matter per se, but the unconscious assumption that Johan dumbfounded an Italian – a nation we have always associated with defensive rocks – certainly gives the moment more gravitas than hoodwinking a 32-year-old capped just 17 times in his entire career.

Yes, it was the first time that anyone had seen the Cruyff Turn, but let’s play Alan Hansen on this moment. Should Olsson being doing better there? Arguably. He commits his body and suffers the consequences. It’s hard to imagine an elite modern defender being quite so naïve and gangly. These were the days before players were labelled “frauds” by internet trolls, though.

Admittedly though, the aesthetics of the shot have helped it stand the test of time. The 1974 edition was only the second-ever FIFA World Cup broadcast in colour, and whoever was filming at the moment Cruyff swivelled - with his slightly-longer-than-a-Beatle haircut and catwalk model frame - caught it at the optimum angle. It was perfectly framed, the camera focusing vertically to where Cruyff changes path.

Zinedine Zidane was never so fortunate to get a perfect stage and camera angle when he pirouetted on the ball and made “the Marseille Turn” his own: not in the way that the stars aligned when he volleyed the iconic winner against Bayer Levekusen in the Champions League final. Pele was behind the rainbow flick, but in an age in which it didn’t look as good on screen.

So naturally - it was a picturesque moment in an otherwise drab game - but it seems odd that the moment that followed Cruyff for the rest of his life was nowhere near the most amazing thing he did in his career.

This was a man that won three consecutive European Cups with Ajax, managed Barcelona to their first and whose name is splashed across almost everything he touched. The Cruyff Turn was a 24th minute whim in a group game. It’s similar to how an artist as enduring and vocally talented as Michael Jackson became associated so strongly with the moonwalk. Did we really reduce such a visionary to a technically simple move?

Maybe though that’s exactly why the Cruyff Turn is still as bewitching as it was 46 years ago.

RANKED! The 100 greatest football managers of all time

It doesn’t require a deft touch or an eye for an angle: it just needs timing. The turn is an evasive football move, getting the performer out of congestion and into space. It doesn’t boast like a stepover does and it’s not Ronaldinho-level in its wizardry. It’s not like a rabona: you don’t see it coming until the last second. One second you’re about to pass: the next you’re not. It’s that basic.

Whilst most tricks in football rely on what you can do with your feet, the Cruyff turn is more about what you do with your body. The satisfaction of the Cruyff Turn is that it subverts your expectations. In this respect, perhaps only Cruyff could have invented the Cruyff Turn: or at least brought it to the masses.

A rebel, often with an idyllic cause, the idea of him turning 180 degrees just to avoid doing the ordinary is idiosyncratically Cruyff. That he should do it so beguilingly, is fitting.

Just as Total Football was based on mad movement off the ball, the Cruyff Turn exploited space. Players all over the pitch, from ball-playing centre-backs to strikers in a tight spot, use the turn as a “Get out of jail free” card: in Total Football, Cruyff could’ve pulled out that trick anywhere on the pitch. The Cruyff Turn was a single move that summed up the fire in him, the showman in him, the team player able to give the on-rushing men in the box a cross, even in a sticky situation.

And yes, Johan Cruyff’s defining moment is one that we all learned before the age of 10. Not a Maradona-slalom of a run into the England penalty area or an Henry zig-zag through the beating heart of Real Madrid’s imperious back four. But Cruyff made us fall in love with football in a different way to such physically gifted men. A boy from humble beginnings in Amsterdam, he showed the world a rich brand of the sport, not just through his ability. But his vision.

The Cruyff Turn makes children of all of us: sometimes imposing defenders and seasoned analysts alike can’t see it coming. Only Cruyff, the man with the greatest vision in football, could. And at its core, the Cruyff Turn is as complex as its master. Simple, unpredictable, rebellious, showing off and yet not showing off for the sake of it.

In 46 long years, we’ve still not seen a trick like it. The Cruyff Turn is the most ordinary of all the extraordinary things you can do with a football: that's why it's become quite so iconic.