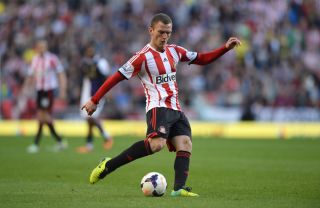 Poyet was announced as Paolo Di Canio's successor earlier this month but has yet to take charge of a game due to the international break.

Gardner believes that could have a positive impact for Sunderland as they go in search of their first victory of the campaign against Swansea City on Saturday.

"When he (Poyet) first came in, he spoke to us all and he seems really good and training’s been brilliant," Gardner told the club's official website.

"He’s fair, he wants to give everybody a chance and the main thing is he wants us to play football.

"He wants us to enjoy playing football and he’s brought smiles back to everyone’s faces.

"He’s got tons of experience and whatever he’s done in the game speaks for itself.

"I spoke to people who’ve had him as a manager in the past and they said he’s brilliant and, since he’s come in, he hasn’t failed to produce that.

"Because there’s been an international break, he hasn’t come in and had two training sessions then a game - we’ve actually had a good week or so together, which is good."

Gardner has started the last three games for Sunderland and scored in their 2-1 defeat to Manchester United before the international break.