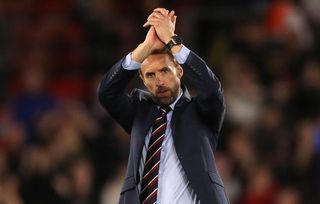 England’s defensive mistakes gave Gareth Southgate food for thought on a night when his attackers’ devastating play proved enough to see off Kosovo in a thrilling Euro 2020 qualifying clash.

The Three Lions boss was at pains to stress in the build-up that international football’s new boys were not only far better than their place 120th in the world rankings but the toughest Group A test to date.

Yet while England’s march towards Euro 2020 continued with a fourth win from as many qualifiers, the pulsating 5-3 win against Kosovo left Southgate with plenty to ponder.

Jadon Sancho’s brace complemented Raheem Sterling and Harry Kane efforts, along with Mergim Vojvoda’s own goal, in a rip-roaring first half that started with Valon Berisha capitalising on a shocking Michael Keane mistake 34 seconds in.

Berisha scored a second in a sloppy second half that saw Harry Maguire foolishly give away a penalty that Vedat Muriqi scored unlike the normally reliable Kane, whose spot-kick miss summed up a strange night in Southampton.

“The outstanding features and the poor features are apparent to everybody, so we don’t need to get the video out and go back through it.

“Poor individual mistakes, a poor start to the game.

“The small period after half-time: ridiculous mistakes, poor decisions, lack of covering back.”

Asked if the individual errors were just a lack of concentration rather than anything more fundamental, the England boss said: “I think that is something that we have to consider over a period of time because there were obviously mistakes that were concerning, really.

“We’ve got to reflect on that, but they were such basic errors, really, that you have to learn from.”

There are no such problems at the other end of the field, with his attacking trio showing just why Southgate considers his forwards among the world’s best.

“Raheem, Jadon and Harry were outstanding,” he said.

“I mean Raheem’s two performances have been of the highest level.

“I think he’s been almost unstoppable, his awareness of where defenders were, his ability to ride challenges, his vision and desire to get in on goal, and unselfish play as well, so I couldn’t speak highly enough of the way he played.

“You know we were talking about the three on Saturday, Jadon’s performance was at that level as well.

“He worked really hard for the team without the ball and showed the ability he has to go past people, to be calm in tight areas. So, that part of our game was absolutely outstanding.”

Eccentric counterpart Bernard Challandes joked it was a shame that Sterling was not Kosovan – “it’s impossible to play against him or you do a foul” – and was pleased with his side’s display at St Mary’s.

“OK, we have decided to try to play football, to take risk and we have seen in the first half how strong England is,” the Kosovo head coach said.

“We have tried, we have played, we have also lost some unnecessary balls and we have paid immediately because the counters of England were very, very beautiful.

“Our idea was immediately to press England for surprise and, OK, we win this ball – or they give us the ball – it’s 1-0. It’s perfect for us.

“But after clearly England were very strong and played a very good half.

“Second half was good for us. If I do British humour, we have won 2-0 and who has won 2-0 against England in one half? Who is the last team?”