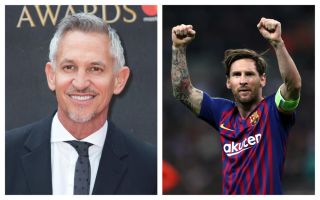 Gary Lineker has responded to criticism of his frenzied celebrations of Lionel Messi’s stunning free-kick goal against Liverpool, saying he was simply “celebrating greatness”.

Reaction when #Messi hits his 600th goal for @FCBarcelona… u have to get excited! Wow 💥⚽️ ps. Get the sound on 🔊 #barcalfc#UCLpic.twitter.com/PlgFtZJvHF— Rio Ferdinand (@rioferdy5) May 1, 2019

After receiving criticism from some English fans on social media, Lineker – a former Barcelona player – tweeted: “Seem to have upset a few @LFC fans by celebrating greatness last night.

“Admittedly it was a bit cringe, but as a former player who loves @FCBarcelona I make no apologies for dancing to the diminutive Dios.”

For those who haven’t seen it, here is Messi’s sensational freekick and goal number 600 for @FCBarcelonapic.twitter.com/jJlHjTCj8S— Gary Lineker (@GaryLineker) May 1, 2019

A true free-kick master.— Football on BT Sport (@btsportfootball) May 1, 2019

Messi’s goal was the 600th of his career, matching Cristiano Ronaldo who hit the same number earlier this week during Juventus’ 1-1 draw with Inter Milan.

The Argentine’s goal made Liverpool the sixth English opponent he has scored against in the Champions League.