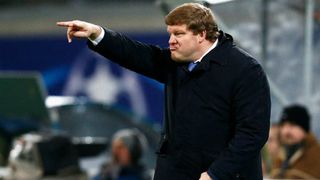 Head coach Hein Vanhaezebrouck has warned Gent against making costly errors as they look to surprise Wolfsburg in the Champions League round of 16.

The Belgian champions progressed to the knockout stages in second place behind Zenit in Group H and are looking to reach the quarter-finals to underline what has been an impressive debut in the tournament.

Wolfsburg have endured some inconsistent form since they defeated Manchester United on matchday six to progress to the last 16, with just one victory from their last six games in all competitions.

And despite his side having won all of their last seven home matches, Vanhaezebrouck has urged his players to deny the German club a valuable away goal in Wednesday's first leg, particularly following Gent's exit from the Belgian Cup at the hands of Club Brugge.

"The difference [compared to the group stage] is that home and away goals are important. We saw the consequence of that in the Belgian Cup," he told the media. "We conceded an avoidable goal at home and that cost us a place in the final. At this level it is even more important to avoid such stupid mistakes.

"We know it is going to be really tough against a good team and if we were to win, we'd be very surprised to be in the draw with seven top sides. For now we must focus on the task in hand to get a good result at home in order to improve our chances for the second leg."

Gent's meeting with Wolfsburg is the first in European competition between the sides.