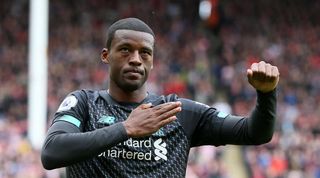 Georginio Wijnaldum has revealed that he wears the No.5 jersey at Liverpool because of Zinedine Zidane.

The Netherlands international moved to Anfield in summer 2016 and immediately took the No.5 shirt, which had been vacant since Daniel Agger’s departure two years earlier.

It was the same jersey he donned during his time at Newcastle, where he spent a solitary season prior to his move to Merseyside.

And Wijnaldum says his admiration for Zidane, who wore the same number during his time at Real Madrid, was behind his decision.

“No.5 is a really special number for me,” Wijnaldum told his followers on Instagram. “It was my lucky number when I was young but also because my favourite player, Zinedine Zidane, was playing with No.5.

“I was really happy that I could start my professional career as number five. Since then I've played with No.5 at Newcastle and when I came to Liverpool, the club basically kept No.5 for me. I was really happy with that.”

Wijnaldum was also asked who his toughest opponent was during a Q&A session, with his answer coming as something of a surprise.

“The toughest opponent I ever played against was Andres Guardado,” the Dutchman added. “There was a game at the World Cup against Mexico, it was really hot and he was my opponent that day.

“It was a really hot day and he just kept running! It was really difficult for me, and besides that, he's also a really good football player.

“On the ball, he was really great. It was a big thing for me to stop him. Because it was so hot, it was more difficult than normal, but at the end, we still won the game.”

The Premier League season is currently on hold until April 30 at the earliest due to the coronavirus pandemic.