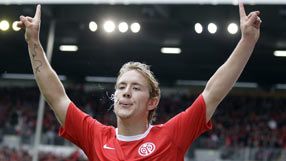 A day before he officially announces the squad for the November 17 game Low said Andre Schuerrle and Lewis Holtby, who have helped Mainz to their best Bundesliga start, would be named.

"Mainz players Schuerrle and Holtby as well as Dortmund's Mario Goetze, Mats Hummels and Kevin Grosskreutz will for sure be there," he told Bild newspaper on Wednesday.

Dortmund lead the Bundesliga with 28 points from 11 games, four ahead of Mainz with traditional powerhouses Bayern Munich, Werder Bremen and Schalke 04 struggling.

Hummels, 21, and Grosskreutz, 22, have one cap each, while 20-year-olds Holtby and Schuerrle and 18-year-old Goetze have yet to feature for Germany.

"All these players have played very well for a long period of time this season," said Low. "I am convinced they can make the leap on to the big international stage.

"The old argument that you have to perform for two or three years before earning a call-up does not count for me. It can also happen after a few weeks and age does not matter."

Low fielded Germany's youngest World Cup team in 76 years in June and July, with an average age of under 25, as they finished third in South Africa.