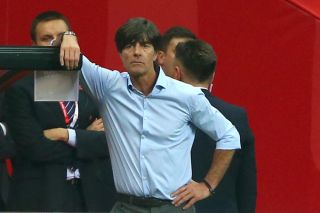 The world champions fell to second-half goals from Arkadiusz Milik and Sebastian Mila to suffer their first defeat in 19 competitive matches, stretching back to Euro 2012.

It was also the first time Germany had lost to Poland since the unification and their first time they tasted defeat in a qualifying match since October 2007.

Low lamented his team's wastefulness during the Euro 2016 qualifying clash, but is eager to move on.

"Obviously, we're disappointed. To be honest, I can't blame my team for much, maybe only that we were too careless with our chances," he said.

"The way we played was fine; we created a lot of opportunities to score. Poland then made it 1-0 with their very first shot.

"We now have to look ahead to Tuesday’s game against Ireland, recharge the batteries and show a good response."

Germany goalkeeper and captain Manuel Neuer took responsibility for the first goal after coming out to punch clear, only to be beaten to the cross by Mila.

"It was an avoidable defeat. We didn't play badly," he said.