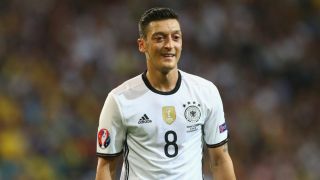 Mesut Ozil is hoping to defy Germany's appalling record against Italy and help propel his side into the semi-finals of Euro 2016 on Saturday.

Germany have not beaten Italy in eight matches at major tournaments and Ozil believes it is high time the world champions put the record straight.

Speaking ahead of the game in Bordeaux, he said: "In history it has always been this way - in the big tournaments we have failed against Italy.

"We have to be professional to overcome that on Saturday, play differently and beat Italy, we showed what we can do it in the friendly [a 4-1 win for Germany in March].

"We have the pedigree to win against any team and we want to show that."

Italy boss Antonio Conte described Germany as "the most complete side in the world" after outlining the task facing his men.

Ozil added: "Naturally that's a big compliment but we are aware of our strengths.

"We know our quality and the most important thing tomorrow is to win the game and to fulfil what the coach wants from us."

There was certainly no shortage of self-belief from Arsenal playmaker Ozil.

"We always have confidence, we have great pedigree. We have experience mixed with young players of the highest quality. You can feel the energy, everyone has one goal; to become the champions," he said.

"We knew from the start that we would confront strong opposition and now we have to succeed against them. We are thinking positively and I am convinced we can achieve big things together."