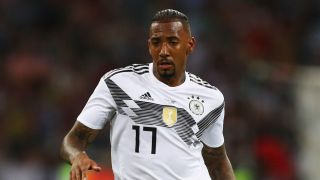 Retiring from international duty after Germany's humiliating World Cup failure is not on the agenda for Jerome Boateng.

Bayern Munich centre-back Boateng was an injury concern heading to Russia, having missed the final weeks of the 2017-18 season with a thigh injury.

The 29-year-old started the shock 1-0 defeat to Mexico and was sent off in the dramatic 2-1 victory over Sweden, meaning he was suspended as the World Cup holders sensationally crashed out with a 2-0 loss to South Korea.

Boateng's club future is uncertain with Bayern stating they are open to offers, but the former Manchester City defender has no doubt about continuing his international career – providing a clear-out is not called for.

Speaking about the possibility of stepping down from Germany duty, Boateng told Welt am Sonntag: "That was never a topic for me. As long as nobody comes to me and says everything should be renewed completely and they aren't planning with me anymore, I want to continue playing.

"I am a leader and willing to get involved. I will try to share my experience with the young players. I really want to help make us come back stronger."

Joachim Low said it would be "premature" to speak about his future after the surprise loss to South Korea, and Boateng was emphatic his thoughts on whether the coach should remain at the helm were requested.

"Definitely. We players were on the pitch. The coach gave us clear words and instructions that we did not implement," he said.

"[It's a] shock for all of us. There was a lot missing: will, passion, conviction. We were paralysed. We just had too many failures."

Mesut Ozil, who was booed by Germany fans for meeting with controversial Turkey president Recep Tayyip Erdogan before the tournament, has been subjected to intense criticism for his lacklustre performances in Russia, which Boateng feels is unfair.

He added: "It won't do. Mesut is a human. You should not put all of the criticism on one person, the whole team has responsibility."