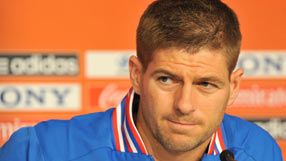 He accepted the players were fully responsible for the first two dire performances in Group C but said they had put the disappointment behind them and would pass their biggest test in years by overcoming group leaders Slovenia on Wednesday.

"You can see the players are hurt from the Algeria performance," Gerrard said on Tuesday of the goalless draw that sparked outrage at home and was criticised by the British media as useless, toothless and shambolic among other things.

"We know we let the country down by underperforming. We can't wait for the game to start and put that right. I can see the hunger in the guys. It's a do or die situation. We have to improve and we're ready to do the business," he said.

Slovenia have four points followed by England and the United States on two and Algeria with one. England have to win unless the U.S. versus Algeria match in Pretoria finishes level in which case a high-scoring draw might be enough.

Gerrard understood why England's fans were angry and said the team would fight to rekindle the spirit and form that got them through the qualifiers with nine wins from 10 matches.

"We have a lot of support out here. People have paid good money and they expect us to win matches so we take responsibility," he said.

"We want to make the nation proud and happy and a win will give our people more confidence.

"There were things missing from that performance (against Algeria). We want to get those things back, start the game really, really well, play compact and difficult to beat and have that cutting edge in the final third."

England coach Fabio Capello, whose team drew their opener 1-1 with the U.S., told reporters again there was no mutiny or disharmony in his squad and said the players were focused and expected to beat Slovenia in their final group game.

He has come under fire for his team selections and rigid use of a 4-4-2 formation and conceded he may have made errors.

"It's possible I made some mistakes, it's possible," he said after an uncomfortable pause. "But it's only the result we should speak about."

The Italian said he expected misfiring striker Wayne Rooney to end his recent slump on Wednesday and scoffed when asked if he would drop John Terry over the central defender's suggestion that there was player unrest in the squad.

Capello said England, one of the pre-tournament favourites, would not crumble under the intense pressure they are facing.

"It isn't a problem to have pressure. This is a playoff for in and out (of the finals) but we're ready to play and the players know there's only one result for us," he added.