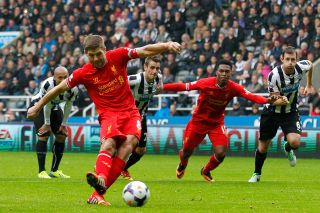 Gerrard's 42nd-minute penalty against Newcastle United brought the game level at St James' Park on Saturday and made him the fifth midfielder to reach a century of goals in the Premier League.

The England captain - who follows in the footsteps of Frank Lampard, Ryan Giggs, Paul Schole and Matt Le Tissier - made no mistake from the spot after Mapou Yanga-Mbiwa had brought Luis Suarez down in the penalty area, sending Tim Krul the wrong way to cancel out Yohan Cabaye's opener.

Gerrard was happy to reach the landmark, having been stuck on 99 goals since March, but was disappointed that Liverpool could not take all three points.

"It's taken a while to get there, but it was nice to score it today," he told BT Sport. "I would have liked it to have come from open play but I'll take a penalty.

"It's nice to get goals but for me I feel a bit disappointed we missed an opportunity to take three points."

Brendan Rodgers' side had a man advantage for more than half the match after Yanga-Mbiwa was sent off, but they were unable to make it count.

Paul Dummett had put the hosts 2-1 ahead early in the second half but Daniel Sturridge earned the visitors a point with a 72nd-minute header.

Gerrard felt his side had done enough to secure the win, and rued their missed opportunities.

"The sending off completely changed it (the game), we dominated the rest of the match but couldn’t get enough goals to win it," he added.

"I thought our all round game after the sending off was very good, I think we did enough to win the game but credit to Newcastle - they hung in there.

"They shot themselves in the foot by getting a man sent off and then it completely changed, we took control and deserved to get the three points, but I think it's chances missed for us."