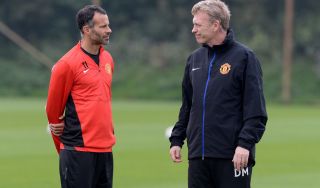 Moyes promoted Giggs – who turns 40 next month – to player-coach when he succeeded Alex Ferguson in May, with former United defender Phil Neville also returning to Old Trafford to form part of the Scot's backroom staff.

Giggs has played in three of United's seven Premier League games this term as his illustrious playing career enters what could be the final season before he hangs up his boots.

The midfielder is relishing his new responsibilities amid speculation he could be one of the contenders for the Wales job as Chris Coleman awaits a decision on his future.

Giggs, capped 64 times for Wales and the holder of United's all-time appearance record, told the Manchester Evening News: "I am enjoying my coaching role at Manchester United – it has been great.

"It hasn't yet got to the point when I go into the dressing room and everything falls quiet.

"But education is the next step in my career and I’m enjoying it. I am enjoying working with the new manager.

"Personally, I would prefer better results but we are only seven or eight games into the season."