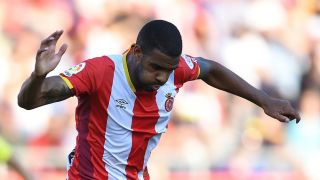 Injury-hit Atletico Madrid missed the chance to temporarily move top of LaLiga as they drew 1-1 at Girona on Sunday thanks to a spectacular late own goal by Jonas Ramalho.

With Barcelona and Sevilla in action later in the day, Atletico could have leapfrogged both teams but Diego Simeone's men had to come from behind at Municipal de Montilivi.

Cristhian Stuani scored twice in this fixture last season and he opened the scoring from 12 yards with a penalty he won himself after being tripped by goalkeeper Jan Oblak.

Atletico were missing captain Diego Godin, Juanfran and Filipe Luis, but the visitors avoided a first defeat in LaLiga since September 1 thanks to Ramalho's late own goal.

Angel Correa's wonderful long pass sent Diego Costa through on goal, the striker beaten to the ball by Ramalho, who could do little but poke the ball into his own net.

Saul Niguez was filling in at left-back but he darted on to a Costa pass to play a one-two with Antoine Griezmann and thunder a drive against the underside of the crossbar.

But Girona took the lead on the stroke of half-time, VAR ruling Stuani was tripped by Oblak just inside the penalty area, with the striker picking himself up to smash home from 12 yards.

Girona goalkeeper Yassine Bounou was quick off his line to halt Griezmann but Girona could have doubled their advantage when Oblak denied Granell at his near post.

Iraizoz could do nothing about Atletico's 82nd-minute equaliser, though, Ramalho stretching to tackle Costa after the Spain striker brilliantly controlled the ball, but only managing to toe a remarkable finish into his own net from 20 yards.

Gelson Martins could have won it in the third minute of added time but he rifled straight at the legs of Iraizoz after holding off the challenge of Bernardo Espinosa.

Villarreal Celta Barça Huesca Eibar Espanyol Atleti ...STUANI is the leading scorer in with 11 goals from only 12 appearances! December 2, 2018

What does it mean? Injuries bite for Atletico

Simeone was forced to name a makeshift back line with a trio of first-team defenders out, while Costa led the line despite suffering from a foot injury. Atletico lacked their usual intensity and two dropped points could be damaging come the end of the season.

With Cristiano Ronaldo having left Real Madrid, many may have expected Lionel Messi to have little competition for LaLiga's top goalscorer prize. But Stuani's 11th of the season has the Girona striker leading the race, moving one clear of Iago Aspas. Messi and his Barca team-mate Luis Suarez have nine goals each.

Rodrigo has been a brilliant signing for Atletico but it was his mistake that led to Girona's opener. A poor pass allowed Patrick Roberts to send Stuani through on Oblak's goal for the foul that resulted in a penalty.

Both teams are in Copa del Rey action in midweek, with Atletico at home to Sant Andreu on Wednesday, the same day Girona welcome Deportivo Alaves to Montilivi.