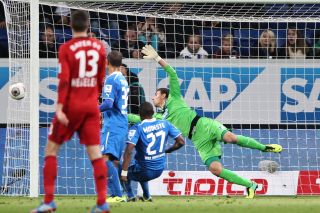 Kiessling's header went through the side netting before ending up in the goal and was paid by referee Felix Brych, helping Leverkusen to a 2-1 win on Friday.

Gisdol said Hoffenheim, who pulled a goal back late through Sven Schipplock, deserved to have the match replayed.

"It's definitely bitter for us and something like this has already happened once, and that game was replayed so I think we're going to see this game again," he said.

"Anything else would be a joke. You can't replay a Bayern Munich game, but not a Hoffenheim game."

Bayern had a match against Nuremberg in 1994 replayed after Thomas Helmer's phantom goal in his side's 2-1 win.

The match was replayed and Bayern won 5-0 to claim the title.

Bayer Leverkusen coach Sami Hyypia said he felt unusual about the goal, despite celebrating at the time.

"I celebrated during the game because it looked like it was in, but of course now it's a bit uncomfortable," Hyypia said.

"But I can't do anything about it. It's the referee who makes the decisions."

Kiessling, who held his head in his hands after missing the chance, said there was nothing he could do.

"Everyone started rushing towards me. What could I do?" he told Sky.

"Honestly, I couldn't really judge what I saw but when Hoffenheim pointed to the hole in the net, I had an inkling."

Referee Brych defended his decision and said no players had indicated to him anything other than a goal.

"I had a little doubt, but the reaction of the players was clear," he said.

"I checked with Kiessling, but no-one, not even him, said that it wasn't a goal. The ball was in the net and for everyone on the pitch it was a legitimate goal."