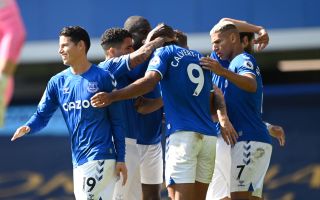 Three seven-goal thrillers across Saturday and Sunday contributed to the most free-scoring weekend in the history of the Premier League.

That helped set up a total of 39 in eight games over the weekend, an average of 4.88 per match – the highest in the Premier League era for two consecutive days of action with at least four total games.

The only previous occasion that comes close was in 1993, in the 22-team era of the Premier League, when the 11 matches over the weekend of May 8 and 9 produced 53 goals for an average of 4.82 per match.

That Saturday, with nine games on the slate, saw a record 47 Premier League goals in one day. On a per-game basis, though, even that average of 5.22 was beaten this Saturday – 21 in four games, averaging 5.25 which is a record for a day with at least four matches.

West Brom’s Grady Diangana started the ball rolling, only for Dominic Calvert-Lewin’s hat-trick to power Everton to a 5-2 win.

Leeds picked up the baton and had to hold off a Fulham fightback to win 4-3, Crystal Palace won 3-1 at Manchester United with two goals from Wilfried Zaha and Arsenal beat West Ham 2-1, with Eddie Nketiah’s late winner the 21st goal of the day.