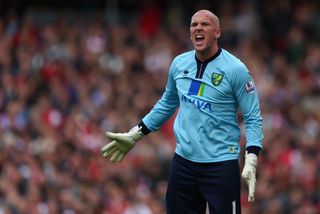 The 27-year-old arrived at Carrow Road in 2010 from Everton and has gone on to make 107 appearances in all competitions.

His form has earned him a first England cap - against Italy in 2012 - and he has been an ever-present in the Premier League this season.

And Ruddy will now remain at Norwich until 2017 - something he is thrilled about.

"I'm more than happy to commit my long-term future to the club," Ruddy told the club's official website.

"I've thoroughly enjoyed my time at Norwich City - everyone has been very supportive. The whole club, the players and staff I have worked with have been fantastic.

"I've broken into the England squad while at Norwich, and without the opportunity they gave me I wouldn’t have been anywhere near it. I was in a bit of a no-man’s land before I joined the club, and they took a gamble on me.

"Thankfully I think it's paid off for both sides and now I’m just looking to keep up my form."