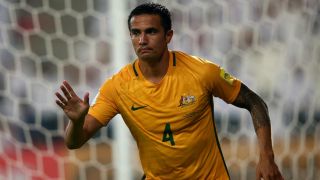 Tim Cahill announced his retirement from international football after an Australia career that will see him go down as arguably the greatest ever Socceroo.

Cahill, 38, retired after scoring a record 50 goals in 107 appearances for Australia.

We take a look at his international career with the help of Opta data.

5 - He netted five times against Japan, the most he struck against any nation.

9 - No player has featured in more World Cup games for the Socceroos (9 – level with Mark Bresciano).

28 - Cahill scored against 28 different nations during his international career.

Today’s the day that I’m officially hanging up my boots on my international career with the Socceroos.No words can describe what it has meant to represent my country. Massive thank you to everyone for the support throughout all my years wearing the Australian badge. July 17, 2018