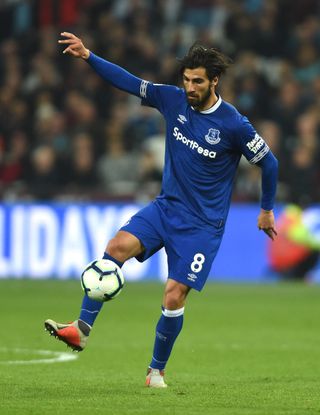 Everton midfielder Andre Gomes is due back at the club’s Finch Farm training ground next week to begin individual sessions as he steps up his recovery from a serious ankle injury.

Gomes suffered a dislocation fracture to his right ankle in the draw against Tottenham in November, an injury that had been expected to sideline him for the rest of the season.

But manager Carlo Ancelotti gave a positive update on the 26-year-old’s recovery on Friday.

Ancelotti says Andre Gomes is expected to begin training individually next week. "It is good news, he is doing well in his recovery, it is going fast so I hope as soon as possible he can be with us." #EFC— Ian Parker (@iparkysport) January 10, 2020

“Andre Gomes can come back next week, and start to train individually here,” he said.

“It is good news. He is doing well in his recovery. It is going fast so I hope as soon as possible he can be with us, because he’s a fantastic player.”

Gomes suffered the horror injury when he fell awkwardly following a challenge from Tottenham’s Son Heung-min late in their 1-1 draw on November 3.

Referee Martin Atkinson initially produced a yellow card for a distraught Son after the incident but upgraded it to red when he saw the seriousness of the injury, though Tottenham later successfully appealed against the decision.

The encouraging news on the popular midfielder’s recovery will come as a significant boost for Everton given their problems in midfield, with summer signing Jean-Pierre Gbamin having been sidelined since August with a thigh problem.