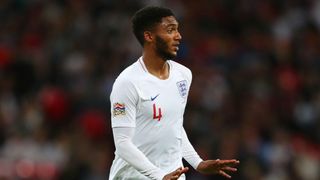 Stones and Jordan Henderson were shown their second yellow cards of the competition in Friday's 0-0 draw at Croatia and will consequently sit out the trip to Seville.

While the England boss was not willing to disclose who would fill in for Henderson, he revealed Gomez, who has started all but two of Liverpool's fixtures this season, will be handed a fifth cap at the Estadio Benito Villamarin.

"It's probably pretty clear Joe Gomez will be coming in for John," said Southgate.

"He's been in good form for his club and his matches for us against Brazil and Spain have been really polished performances.

"He's a young defender but a good defender, good athleticism and uses the ball well. I'm looking forward to seeing him in this game.

"It's an opportunity to look at a couple of younger players and we are slowly building a squad of players capable at the highest level."

Gareth Southgate confirms will replace Stones in the starting XI: "He's a young defender but a very good defender, so I'm looking forward to seeing him in this game."October 14, 2018

England switched from a three-man defence to a 4-3-3 for their trip to Rijeka and Southgate is keen to keep his options when it comes to choosing his formation.

More important to the manager, though, is settling into Monday's match quickly and making life difficult for Luis Enrique's Spain, who were 2-1 come-from-behind winners when the teams met at Wembley last month.

"It's good that we've got options because different teams pose different tactical problems. We knew we needed to get tight to Croatia's midfield and [Monday] is very similar," said Southgate.

"But Spain have a slightly different style. We know their technical ability, but we've got to cause them problems too.

"At Wembley we got more comfortable with their style and in the last 30 minutes we were the dominant team. We can't come here to defend for 90 minutes.

"They've got a new coach who's a top coach and you can see the difference he's tried to make. They're a little bit more direct with speed in the front three. Although the style and the philosophy is very similar, it's tactically a little different and in that final third it's a little more of a direct threat.

"We've got to be prepared for that. It's as difficult a test as you could have in world football, but we're ready."

Spain can seal their place as Nations League finalists with a win on Monday, a result that would leave England battling Croatia to avoid relegation to League B.