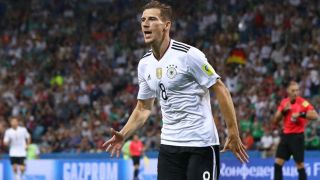 Leon Goretzka will join Bayern Munich on a free transfer at the end of the season, as Karl-Heinz Rummenigge highlighted the importance of keeping the midfielder in the Bundesliga.

The talented 22-year-old has repeatedly been linked with a switch to Bayern since entering the final year of his Schalke contract.

Liverpool, Juventus and Barcelona were all reported to be fighting for the Bochum academy product's signature, having developed into one of the Bundesliga's finest midfielders despite his relatively tender age.

But Bayern - whose charm offensive has been on overdrive in recent weeks - have won the race, reaching an agreement for a four-year deal which will come into effect on July 1.

And club CEO Rummenigge believes keeping Goretzka in the Bundesliga is a coup.

Speaking to Bayern's official website, Rummenigge said: "We are very happy that Leon Goretzka, a German international who is a great prospect, has decided on FC Bayern, despite considerable competition from abroad.

"This ensures that Leon Goretzka will remain in the Bundesliga."

Goretzka will hope to finish the season well with Schalke to make sure of a place in Germany's World Cup squad.