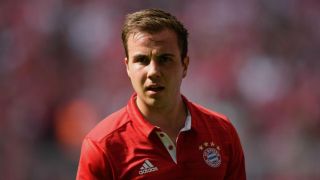 Borussia Dortmund CEO Hans-Joachim Watzke has made it clear the return of Mario Gotze from Bayern Munich is by no means a done deal yet.

Bayern chairman Karl-Heinz Rummenigge confirmed at the weekend that the clubs are in talks over the Germany international following months of speculation, but an agreement still seems far away at this stage.

"We can imagine Gotze returning to BVB," Watzke told TZ. "But it is not a done deal yet and no final decisions have been made yet.

"We have not reached an agreement with anyone, not with the club, nor with the player. It has to work out for us financially."

Dortmund fly out to China on Thursday for their pre-season tour and Watzke has suggested negotiations will still be ongoing by then.

"Thanks to modern communication tools, we can keep working on this from China," he added.

Gotze, 24, left Dortmund for Bayern in 2013, but never really lived up to expectation at the Allianz Arena.

The attacking midfielder's contract with the Bavarians runs until June 2017.