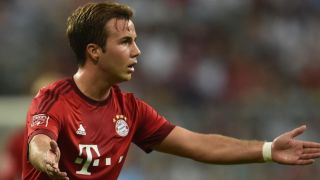 Mario Gotze has dismissed speculation that he is set to leave Bayern Munich for a reunion with Jurgen Klopp at Liverpool.

The Germany international starred under Klopp at Borussia Dortmund before joining Bayern in 2013.

Gotze is stepping up his rehabilitation from a groin injury that has sidelined him since October and, despite Bayern sporting director Matthias Sammer this week dismissing any potential move to the Premier League club as "nonsense", the player himself told Sport Bild that "everything is open".

But in quotes given to TZ, the 23-year-old ruled out joining Liverpool in the immediate future despite a frustrating period in Bavaria.

"I can rule out a move to Liverpool this winter," Gotze said. "I don't know where the rumours about Klopp and me are coming from.

"I have not heard anything. You should ask Klopp if he wants me at Liverpool. If he wants me, he should approach me.

"I have six nice months ahead of me. It is always annoying when you cannot play and cannot help the team.

"It is only normal that you think about things like that. But you have to look at the positives and build on those."

Gotze's contract at Bayern runs until June 2017 and he is keen to experience life under Carlo Ancelotti when the Italian replaces outgoing coach Pep Guardiola at the end of this season.

The man who netted the winning goal in the 2014 World Cup final is keen to re-establish himself at Bayern and is buoyed by a glowing reference on Ancelotti given by Toni Kroos – his international team-mate who played under the former AC Milan boss at Real Madrid last season.

"I have spoken about Ancelotti with Kroos and he only had good things to say. I have had Klopp, [Joachim] Low and Guardiola as my coaches before. There could be worse coaches than those four.

"I want to become the face of Bayern and take my responsibility here."