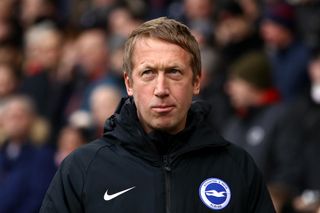 Potter has been alternating the two strikers in recent weeks, with summer signing Maupay getting the nod last week and scoring in the draw at Sheffield United.

Potter has praised the capabilities of both players and discussed the possibility of playing them as a partnership ahead of Saturday’s televised clash with rivals Crystal Palace at the AMEX Stadium.

“Both can play together or on their own, we’re lucky to have both of them and they’re different types of players in their own right,” Potter told the club’s official website.

“They’ll both score goals. All things are possible. Everybody’s fired up and ready, everyone’s had a good training week and wants to play.

“It’s a challenge because you have to choose the right combinations and team. But I’m delighted with the spirit, quality and togetherness that the lads have been showing this week – now we have to transfer it into Saturday.”

Brighton are seven matches without a win in the Premier League, drawing the last three, and they head into Saturday’s lunchtime kick-off four points above the relegation zone.

Potter has called on the supporters to play their part in helping the team return to winning ways against their rivals.

“My message to the fans is to enjoy the game and get behind the team in the right way in order to help us get the three points,” he said.

“It’s a big game for our fans. I understand that football is an emotional experience and that people can get disappointed or frustrated, but our fans are fair-minded and know we need them.

“They’ve been brilliant with us so far this season and we want to give them something to cheer this Saturday.”

Brighton have been boosted by the return of Dale Stephens ahead of the Palace clash.

The midfielder, who missed the last two matches against Watford and Sheffield United, is available for selection after recovering from a groin injury.

Teenager Tariq Lamptey, who continues to impress in training, and Alexis MacAllister are also fit and looking for a place in Potter’s squad, which leaves Jose Izquierdo (knee) as the only absentee.