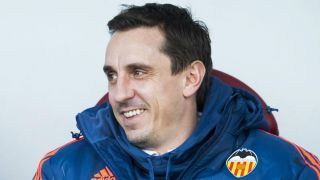 Valencia eased into the last eight of the Copa del Rey by completing a comprehensive 7-0 aggregate victory with a 3-0 second-leg win at Granada.

Gary Neville's side did the damage in last week's last-16 first-leg clash at Mestalla in running out 4-0 victors, thanks in the main to an Alvaro Negredo hat-trick.

But goals from Wilfried Zahibo and substitute Paco Alcacer, plus a late penalty from Pablo Piatti, added further gloss to the scoreline in Thursday's second leg, with Valencia now safely in the hat for Friday's quarter-final draw.

Zahibo took advantage of some questionable goalkeeping from Ivan Kelava to nod Valencia into a 1-0 lead on the night three minutes before the break.

Neville replaced first-leg hero Negredo with Alcacer in the 63rd minute - and the Spain striker made an immediate impact, clinically finishing past Kelava just seconds after coming on.

And Valencia rounded off an easy victory six minutes from time, when Piatti coolly dispatched the spot-kick given after Zakaria Bakkali was clumsily brought down in the area.