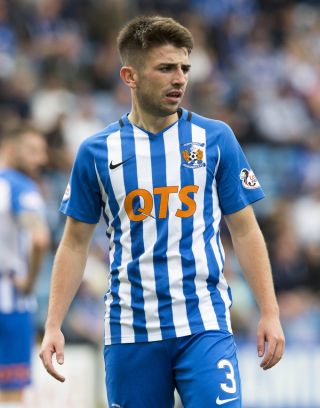 The Rugby Park left-back is one of four players in the running for the Scottish Football Writers’ Association’s young player of the year award and Clarke insists the 21-year-old is a deserving nominee.

And he also suggested that his player is ready to make the step-up to the international scene.

Taylor’s path to full Scotland honours has been blocked by both Liverpool star Andy Robertson and Celtic ace Tierney.

But with the Hoops defender set to undergo double hernia surgery this summer, ruling him out of the Scots’ Euro 2020 qualifiers with Cyprus and Belgium in June, Clarke – who remains one of the leading candidates to replace Alex McLeish as national team boss – believes his time might finally have come.

The Killie boss – who is also in the running for the SFWA’s manager of the year prize – said: “There’s no reason why Greg can’t be chapping on the door.

“There are some rumours going around that Kieran Tierney is going for a post-season operation.

“Andy Robertson will be involved in the Champions League final which is fantastic, but there will be space there and there is always the possibility of opportunity in football. Circumstances always change.

“You never know (if Greg is ready for international football) until you put him in at that level.

“Greg has been very, very consistent at SPL level since I came to the club. He’s been absolutely outstanding.

“He’s served his time with the national team’s under-21s, so until you put them up to the next step, you never know.

“But I’m pretty sure he’s got the talent to do it.”

Clarke might end up being the man who decides whether Taylor is selected if the Scottish Football Association make their move as expected next week.

If he does call time on his 18-month Rugby Park reign, he has the chance to go out on a high by securing the club’s first third place finish in 53 years and with it a Europa League ticket.

Two wins against Saturday’s opponents Hibernian and then Rangers on the final day of the season should be enough to hold off rivals Aberdeen.

But even if they miss out on qualifying for Europe for the first time since 2001, midfielder Rory McKenzie insists Clarke’s legacy is already nailed down.

“Getting into Europe would mean a lot,” he said. “I’m not going to lie, no-one in here thought we’d get a European slot at the start of the season.

“If you’d said that to us four years ago we’d have said there was no chance.

“For me it just shows how far we’ve come under Steve.

“He’s not just taken us away from the bottom, it’s now two consecutive top sixes, now the top four so you can’t stress enough the changes.