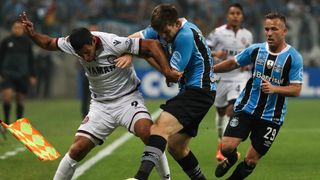 Gremio drew first blood in the Copa Libertadores final after claiming a late 1-0 victory over visiting Lanus in the opening leg.

Substitute Cicero was the hero on Wednesday as he came off the bench to give two-time South American champions Gremio a slender advantage in the 83rd minute.

The highly anticipated Libertadores showpiece seemed to be petering out to a draw with Argentine side Lanus frustrating the Brazilian hosts in Porto Alegre.

It sparked wild celebrations in the stands as Gremio fans dream of their first Libertadores title since 1995.

Lanus – featuring in the Libertadores final for the first time – will host the return leg on November 29.