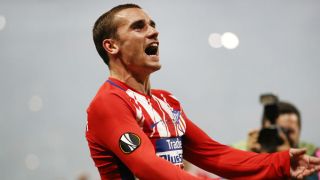 The images of Antoine Griezmann and Dimitri Payet shining each other's boots were some of the abiding ones of France's brilliant but ultimately unsuccessful run to the final of Euro 2016.

But their experiences of Wednesday's Europa League final at a cacophonous Groupama Stadium could hardly have been more contrasting.

Marseille and Payet had started brightly, with the captain and Florian Thauvin to the fore as they pressured Atletico in the early going.

But pressure is something Diego Simeone's Atletico relish. They soak it up and wait for you to make a mistake, and when you do, it is usually Griezmann who is there to pounce.

And so it went in Lyon as Griezmann snaffled the first opportunity he got after 21 minutes, calmly slotting beyond Steve Mandanda after errors from the Marseille goalkeeper and Andre-Frank Zambo Anguissa and a forward pass from Gabi combined to set him up for a one-on-one.

Just 11 minutes later Payet cut a devastated figure. He was a doubt pre-match with a muscle strain and limped off in tears, not only dealing a blow to Marseille's hopes but possibly giving plenty for Didier Deschamps to think about just a month away from the World Cup in Russia.

Without Payet, Marseille were rarely a threat, one-goal leads are something Atletico can protect with the most deflating of ease, but on this occasion, they elected to give themselves an extra cushion.

We've lived through many emotions in the this season. The journey has been long, hard but ultimately we came up short.Thanks to our fans for sticking with us, and congratulations to May 16, 2018

The man to provide it? There is no need to ask.

Just four minutes into the second half and Griezmann turned the hill a Marseille team missing their best player had to climb into Mount Everest.

A slick throughball from Koke and Griezmann was in to loft the ball over Mandanda with an ease of a forward who knew he was superior to everybody else on the pitch. No hesitation, and no hope of Marseille resurrecting a chance of earning direct qualification into the Champions League group stages.

The football gods demonstrated it was not to be their night as a Kostas Mitroglou header bounced off the inside of the post and out before veteran Gabi had the final say after another assist from Koke.

The amount of rumours of an impending departure that will likely intensify due to Griezmann's man-of-the-match performance could well compare with the number of flares brought to proceedings by the Marseille faithful, and his performance will naturally thrill Deschamps ahead of a tournament where France are among the favourites.

But for France, Payet is the creative fulcrum who is good enough in front of goal to take attention away from Griezmann, they are an accomplished tandem, and Les Bleus are a much more dangerous proposition with both of them on the field.

It remains to be seen how severe Payet's injury is. But the prospect of him travelling to Russia while not fully fit is not an enticing one for Deschamps.

Griezmann, as he showed in Lyon, has a knack for celebration but, for France to have the best chance possible of replicating their triumph of 1998, he needs to be doing so alongside Payet.